I come accross Strats and Teles a lot - I'm a Fender player myself. Its very common for the pick-up height to be adjusted incorrectly. 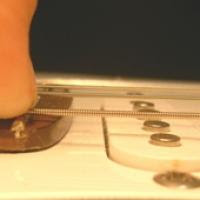 Its something that's easy to sort out and can make a big difference to your sound. If the pick-up is too far from the string it won't 'hear' it enough. The result of this is not only a lack of volume and power but a tonal change. There's not as much attack to the note and a fender can loose its percussive 'boing'. If it's too close, however, a few things can happen. The magnet 'sucks' the string in. This happens more on the bass side than the treble. The string usually vibrates in a circular motion but with the magnet too close it can only vibrate vertically. The result of this is 'wolf tones'. The bass strings when played on the higher frets have a strange warble and often it sounds like there's an odd harmonic interfering with the fundamental. In some cases the string is pulled down enough to cause fret buss on the higher frets - often mistaken for an uneven fretboard. 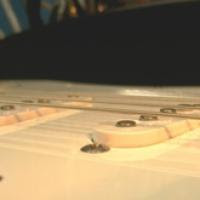 The height is adjusted using the two screws one each end of the pickup. The pickups are either mounted on springs or more often on the expensive ones with rubber sleeves. The rubber is just traditional and in fact not a very good system. When adjusting the height you can often feel the rubber fighting against you. Press the E strings down on last fret and look at the gap between the bottom of the string and the top of the pickup magnet. Fender factory spec is 1/8" (3.2mm) on the bass side and 3/32" (2.4mm) on the treb for a standard strat. Another way is to wind the pickup too close to the string until you hear the wolf note and then back it off until its gone.
The same goes for most single coit pickups. With a tele neck pickup, however, be aware that the cover has no magnetic influence and the magnet is of course below it. Its best to use the listening method with these pickups. Its worth playing around with to find what suits you. Hope this has been useful.