It is very common for electric guitars with single coil pickups to hum. Humbucking (double coil) pickups get their name from their ability to get rid of hum. A typical 'Strat' pickup will have over 7000 turns of wire on it. I've never worked out how many kms that is but I'm sure its a long way. This much wire makes a pretty good antenna. There's a lot of electromagnetic interference flying about in the air for this antenna to pick up. Electric devices such as fridges and strip lights are particularly bad for this. Not only can these man made items cause problems but so can cosmic background radiation. This is the radiation present all over the universe caused by the Big Bang - known as the shadow of the big bang. Its been around for nearly 14 billion years just waiting to get into your pickups. The way to reduce this hum to an acceptable level is to incase all of the guitar's electrics in a metal box and earth that box. That way all the interference will be cancelled out to earth before becoming a nusance.

Incidentally - this is how humbuckers do it: An electric guitar pickup is simply a magnet with a coil of wire around it. When something ferrous (a steel guitar string) is passed through the magnetic field is disturbs the magnetic flux and causes electrons in the wire to flow - this is of course electricity. But its not much electricity which is why we need to amplify it if we wanna ROCK. The signal produced is a sine wave (AC current) with peaks and troughs co-inciding to the string moving closer and further away. Imagine two pickups producing two sine waves with peaks and troughs at the same time. If we swap th ewires around on one of these pickups a peak will occur on one at the same time as a trough is on the other. These signals are out of phase and almost cancel each other out. But they also cancel any hum. This is great - no hum - but also much less sound and a funny nasal one at that. Now the clever bit is with the magnet. One coil is given a North pole and the other a South.This puts the pickups out of phase again and therefore back in phase. They are electrically 180 out and magnetically also 180 out. The result is two coils working together with almost no hum.

It this case I am screening a Kramer bass. It has one single coil pickup which the customer is not happy with. It has such a low output as to be almost unusable. He's taken it to a repairer before who recommended an outboard pre-amp to boost the signal. The pre-amp has made it louder but with the gain right up has also boosted any hum. I've decided to go to the root of the problem and re-wind the pickup as well as fit another magnet. I've suggested to him that while all the electrics are out and the pickup is in bits I also screen both the cavities and the pickup coil. This way he will have not only a better sounding and louder pickup but almost no hum. And of course he's now got a pre-amp he can sell to help pay for it. 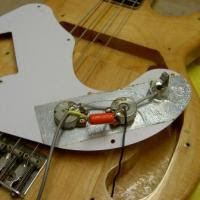 The body had no screening at all. The pots and jack socket have a small piece of foil on the plate but its not really going to do much good as a screen. I've slackened the strings off to get the plate out but there's no need to take them off. This saves time and also string breakage. 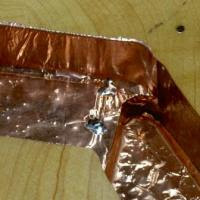 The cavity is screened by lining it with copper foil. Several pieces need to be cut and I make sure they overlap. The idea is to make a box. The foil I use has a sticky back which is also conductive so that each touching piece connects. I don't quite trust this so I also solder each piece together. 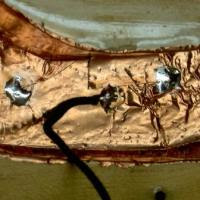 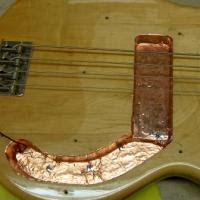 So the completed body screening looks like this. I've kept is as neat as possible and left no gaps. Of course not all guitars are as easy to do as this one - Strats are a bit more complicated and of course its usually Fenders that I have to do this job on.Its unusual for a manufacturert o do a good screening job. 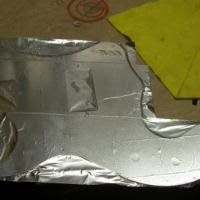 The screen on the underside of the scratch plate completesthe box. I use aluminium foil for this and cover the whole plate. The electrics are bolted directly to it so there's no need for an earth wire. 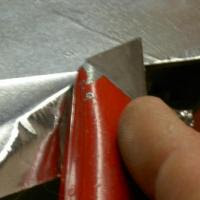 I don't cut this foil to size before sticking it on because its so much easier to do after. I use my knife as a scraper. I run it along the edge at an angle which scrapes through the foil. I then peel off the remainder and its undetectable when you screw the plate on. The same goes for the pickup hole. 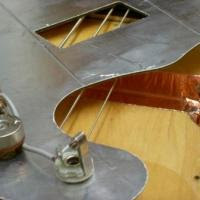 So here are the finished items. They should fit together well and made a good earthed box. I often see black carbon spra on screening used in cavities on production guitars - its not a patch on doing it this way. So that's the bulk of the electrics sorted, now its on to the pickup. 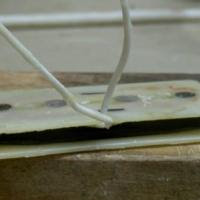 Kramer have used a large single coil pickup on this guitar. Its very similar to a P90. I have already re-wound it to give it a bit more oomph. I've potted it in wax and wrapped the coil in some tape to protect it and as an insulating layer between the coil and the screen. I'll go through the winding process another time. 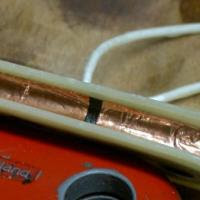 Its back to the copper foil. I first cut the foil to the correct width and then wrap the coil with it. It is very important not to loop it all the way around the coil. A loop of wire is an antenna which would have the opposite effect. I leave a coulpe of mm gap tom ake sure it works propperly as a screen. 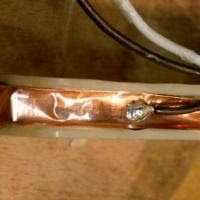 Again I run an earth wire from it and to the back of the pots. A lot of care needs to be taken soldering onto the pickup. The windings are delicate and the insulation on the pickup wire
can easily melt causing a short circuit. I've just wound this one so I could wind it again - but if it was a vintage Fender...

Now its just a case of wiring in the pickup and the extra earths, tuning it, setting the pickup height, testing it all and calling the customer. I wonder if he's sold that pre-amp yet.
Here are a few more pics to show you how screening looks in a Strat: 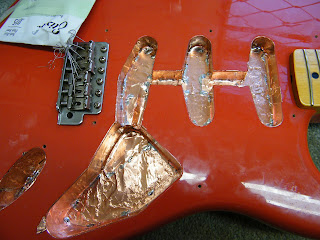 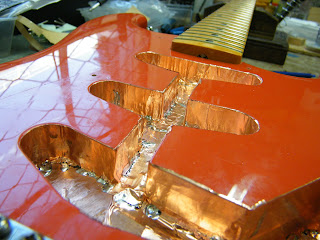 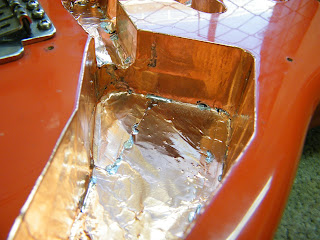 Cheers,
Glyn
I am no longer repairing guitars - since covid 19 I now work full time making pickups
www.mrglynspickups.com
Posted by Glyn Evans at 12:22