A Look at a Pro's Guitar

This time I'm looking over a Pro guitarist's highly modified Stratocaster and his set up preferences.
Warren Mendonsa (http://en.wikipedia.org/wiki/Blackstratblues)
is known as a Strat player though he is certainly not a traditionalist.
He 's brought his Strat in primarily for a re-fret but I've taken the opportunity to to take a few pics and have a good look over her too. 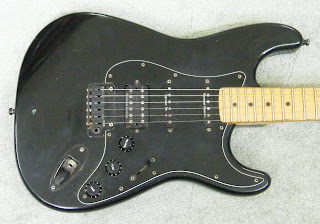 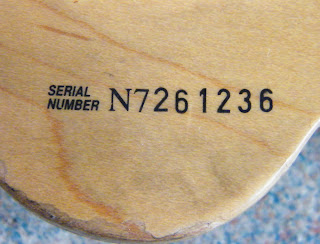 She has an alder body and a maple neck - a great combination for a warm, loose strat sound.
From the serial number you can see she's a 1997 Strat. Fender started this dating system in '76. The N7 represents '97, if it was an '86 it would say E6 etc. 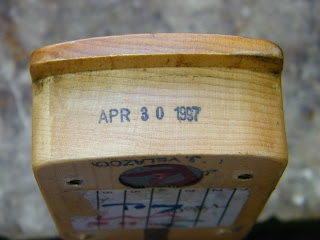 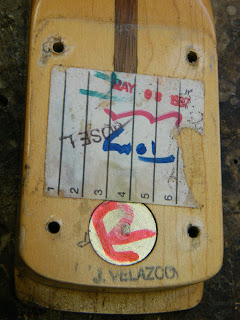 With the neck off you can see the guitar's exact 'birthday' and the stickers and stamps from when it was put together. The large round metal thing is the truss rod anchor. This guitar has the neck micro-tilt system and the anchor doubles up as a plate for this to push against. 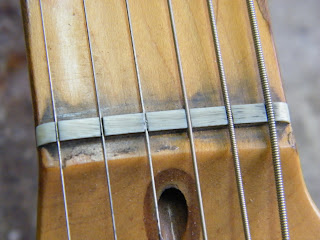 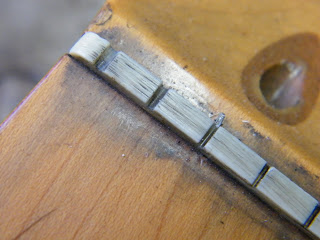 He's had some string buzz on the open D string at some point and has put a small piece of guitar string in the slot to raise it up. I'm going to make him a new bone nut. All the slots in this one will be too low when the new frets are in. 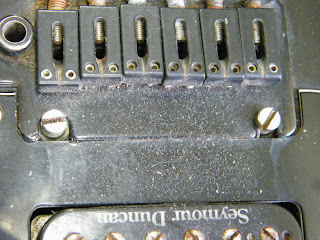 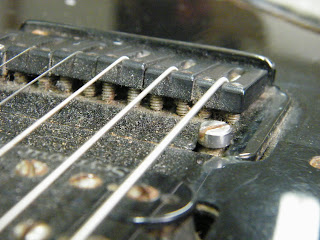 The bridge saddles have been changed for Graphtech Stringsavers so I can assume he's had string breaking problems in the past. The front of the trem plate is butted up against the pickguard so I'm going to remove a little bit of the plastic to relieve this. Everything needs a good clean and lube - it gets a lot of use. 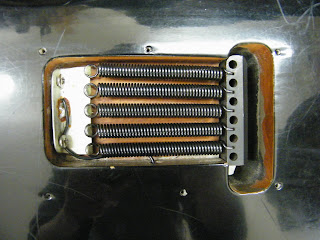 He doesn't use the trem so has 5 springs in the back. You can clearly see here that this strat has been re-finished at some point. He's a big fan of fat steel trem blocks (me too). A fat, heavy block can add quite a bit of life to a Strat. 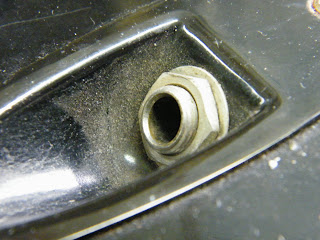 The jack socket is dirty and needs a clean or I may even replace it. 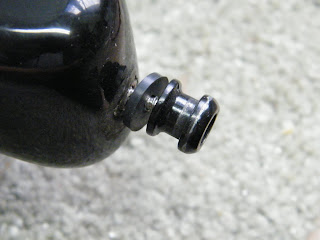 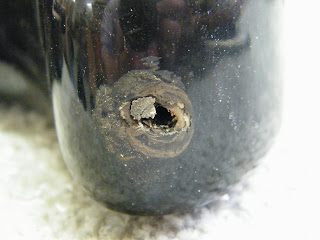 The strap hooks are a disgrace - he's filled the holes with matchsticks but that is only ever a temporary solution. It can be pretty unpleasant if these fall out on stage.
I drill both strap hook holes out to 10mm, plug them with maple and screw the hooks into the them - that should last him. 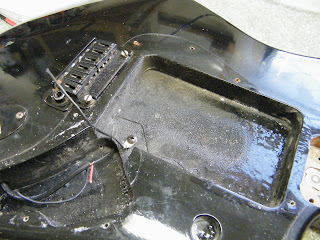 The body has what is known as the 'swimming pool' route as a pickup cavity. This is frowned upon by purists but this Strat sounds great... 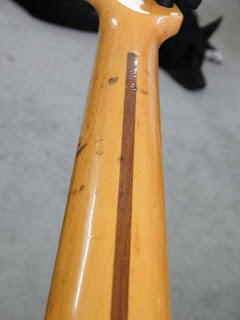 The back of the neck has seen some action but he's happy with the feel so there's no need to do anything about that. 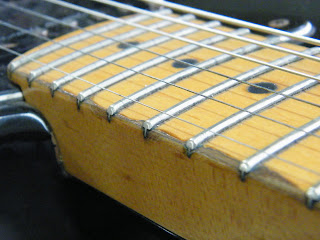 You can see where he's worn the lacquer away on the edge of the fretboard. When I re-fret it Warren wants me to leave the finish as it is - he's earned that wear. 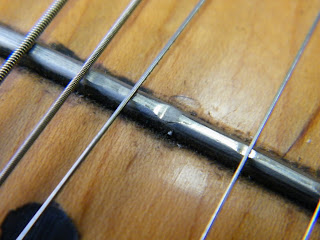 On the subject of wear - this is why the guitar is on my bench. It really does need a re-fret. He favours jumbo frets (Dunlop 6100). Again, not traditional. The board is the stock 9 inch radius.
These frets give a modern feel. With frets this high his finger tip will barely touch the wood which gives more controlled vibrato and string bending. There is barely any wear to the lacquer on the face of the fretboard. Check him out on youtube or buy the album - such a controled left hand. 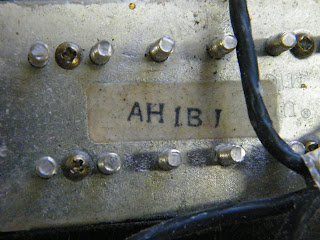 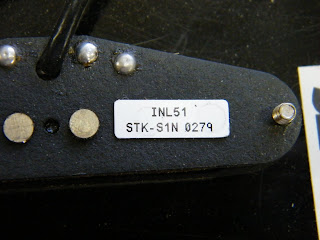 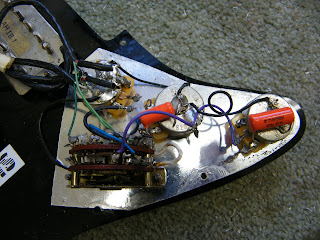 He's using Seymour Duncan pickups - a SH-AH1 Allan Holdsworth Humbucker in the bridge and STK classic stacks neck and middle (both neck pickups). These are wired into cts pots with Orange drop tone caps.n The pickguard is an aftermarket and by Allparts. 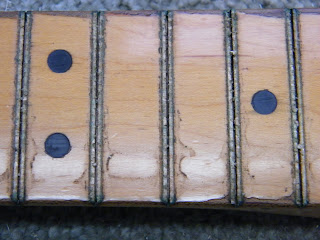 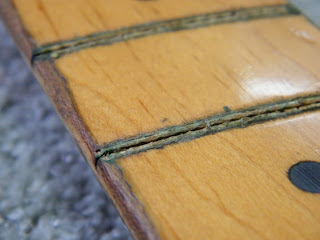 On removing the frets there was a fair amount of muck but the slots have fared well (this is not her first re-fret).
I'm not going to go into any detail about the re-fret, I've done that before (http://mrglyn.blogspot.com/2008/11/maton-phil-manning-re-fret.html)

I've enjoyed working on Warren's Strat and having a chat with him. You can check him out at
http://www.blackstratblues.com/