This one came in last week, its a 1973 Gibson SG. I have a bit of a love/hate relationship with SGs. I love the sound of them, that mid-range definition, fat but with bite. I love the access to the high frets, there's just nothing in your way. I love the look of them, so simple, not over flash and with a hint of Batman (ha ha). But I'm not so keen on the way they ballance - just too neck heavy and the neck/body joint is just so weak.This one has had a problem with the neck joint that's been re-glued by someone before. The neck angle is such that the bridge is adjusted so its right down on the body and the action is still too high. The neck needs to come off and put back at the correct angle with of course no visible evidence of any work.SG necks are glued in using a heat reversable glue so normally it could be heated and removed. But this one has been re-glued by someone else and I'm not sure what glue they've used.So the first thing to do is remove the end of the fretboard to expose the joint. I remove the fret directly over the joint, saw through the board, heat it up and remove it (See the posting on the Fernandes 'V'). 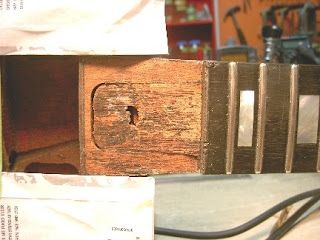 Here's the neck joint exposed. Its just a simple tenon joint. Incidentally its the same in a Les Paul. The hole in the middle of it is the truss rod anchor. The joint isn't the most snug fit I've ever seen but its not the worst either. The white pieces of paper either side of it are to protect the finish from the heat I'm about to apply to it to remove the neck. I can see from bits of glue residue left from the last repair that PVA (white glue) was used. This is why the neck has crept forward under string tension. PVA is ok for general woodworking but this is a guitar. PVA is still elastic when its set so its not suitable for stressed joints. It is heat reversable though so I'll be able to get the neck off ok. I warm the neck joint up very carefully using a heat gun to soften the glue and with a lot of patience it starts to move and eventually comes off cleanly. 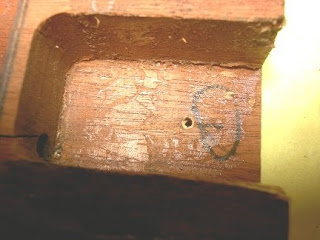 You can see a load of glue still stuck to the neck pocket in these shots.The next job is to clean the joint up and get it ready for re-gluing. 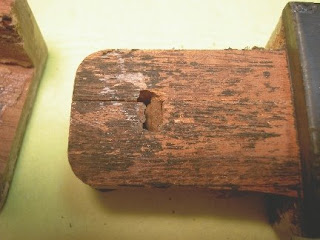 I've decided to use animal glue for this job. Its strong, is heat reversable (someone might need to take it appart in years to come) and has great tonal qualities. 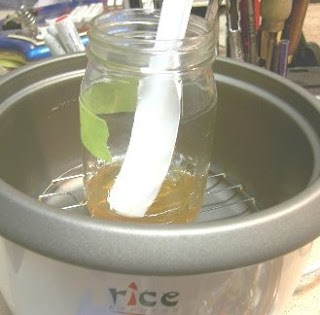 The glue beads need to be mixed with water and warmed up to mix and soften. I use a rice maker for this on its heatsetting (not boil). It takes a while for the glue to be ready so I spend that time dry running the clamping. Animal glue doesn't give you much time. It gels really quickly so the joint is goint to have to be clamped up quickly. I'm using a couple of guitar strings to pull the joint in and a clamp to hold it together. The strings can also tell me if I've got the angle correct. I've fitted the bridge and adjusted it to the height I want itso I check the neck angle by measuring the action at 12th fret. I'm aiming at 2mm.When the glue's ready I warm up all the surfaces of the joint just to delay the gel time a little when it all goes together. 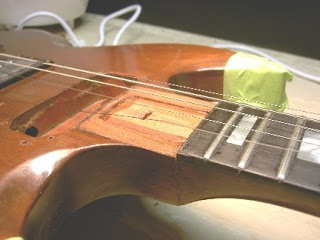 Any glue that squeezes out can be removed with a damp cloth. I've put tape over the end of both horns to protect them from any knocks. This photo was taken after the glue was dry and I'd taken the clamp off. So all that remained was to replace the end of the board, put the fret back in and give it a fret stone to make sure everything was level. Then put the neck pickup back and set it up. The guitar turned out great and sounded better too. That rubbery PVA was doing the tone no good at all and of course its a lotmore playable now. 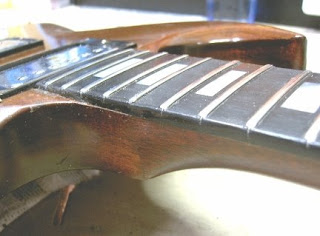 Jobs like this are very satisfying, I love the major structural stuff that changes a guitar thats a bit duff back into what it should be. This SG sounds great, its got a lovely feeling 'old style' fat neck and plays like a dream - I wish it was mine ha ha.