Multiscale Guitars - what's it all about?

Recently I've been making a few acoustic guitars. Some have been custom orders and some to have at the workshop for sale.
But until now I haven't made a multiscale guitar. I've been interested in multiscale guitars for a while but have never played one. I find the idea of them very appealing so I just had to try one out.

As you can see the frets, nut and bridge are not parallel.
The idea behind it is so much more than a gimmick - there's a lot of sense in it.
It's all about scale length - the distance between nut and bridge.
Scale length plays a huge part in the tone of the guitar. To put it in electric guitar terms - ever wondered why a Strat and a Les Paul sound and feel so different? One of the main factors is scale length.

A Strat has a longer scale length than a Les Paul (25.5 inch to 24.75inch). To tune a longer string to the same pitch it needs to be tighter. So a Strat has more string tension than a Les Paul for the same gauge strings in the same tuning.
The result is, the bass strings of a Strat have a lovely chime where as the Les Paul bass strings can be a bit woolly (especially when tuned down).
But the more taught treble strings of a Strat can be a bit pingy where as the Les Paul treble strings really sing.
So it makes sense to build guitars with a combination of scales. PRS use a 25 inch scale length to try and get the best from both. But that doesn't solve the problem, it just compromises on both bass and treble.
I decided to build this guitar with a 25.625 bass string and a 24.75 treble with the scales converging at 12th fret.

It's not a new idea - not at all, it's been around since the 16th century.

The guitar is constructed slightly differently to allow for the different scales. I've off set the internal braces and bridge plate. 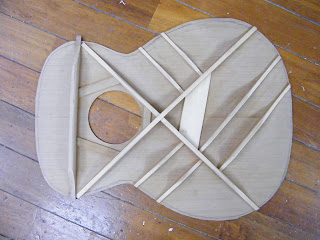 I carved the braces to free up the bass side and help the treble project. 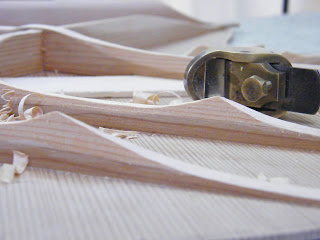 The body is of Australian Blackwood,Cedar top and Mahogany neck with a traditional tapered dovetail neck/body joint. The headstock has been modified to accommodate the angled nut. 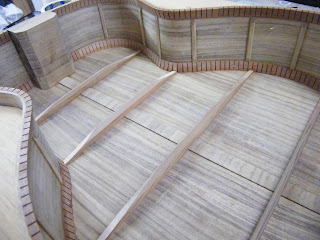 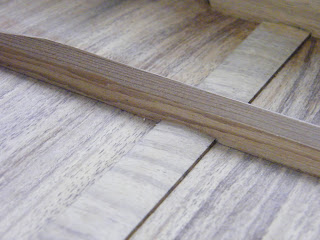 I use the traditional tapered dovetail neck/body joint. 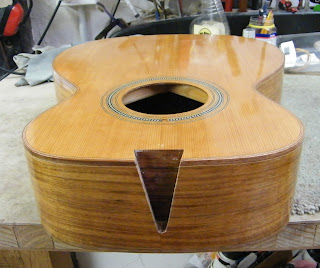 I'm delighted with the result. The bass is clear, the treble is punchy but warm, there's a well balanced mid range.
Having each strings at its ideal tension means it intonates superbly. - I'm chuffed.

From a players perspective - how does it feel? I imagined it would take a bit of getting used to, but not so. The biggest surprise has been how easy and natural it is to play.
So far a few people have played it and they've all found it feels natural.
Dylan Kay (http://www.aucklandguitarschool.co.nz/) popped in the other day and he loved it. 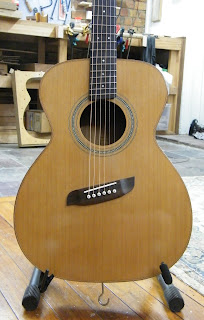 This guitar is residing at my workshop (until someone buys it) - pop in for a play. And of course if you'd like a custom made guitar... (especially a multiscale)
Cheers
Glyn