On tour - Tales From The Back Line

There are a few different aspects to guitar repairing. All my work happens in my own controlled environment - the workshop.
Touring Guitar Techs have to work wherever they find themselves - they need to be quick, have magician like fault finding skills, work under pressure and remain good humored.
Gavin Downie is such a wizard, take a look at his blog

Not only does Gav have the coolest job in NZ but he's a top bloke too - can't wait til he writes his memoirs.

Be sure to read his piece called:

From the Musik Market to find Bungalow Bill


Some NZ music history you may not know

So what guitars do I use?

Over the years I've managed to wittle down the amount of guitars I own.
It's not easy parting with instruments but I feel if they're not getting played then they're not earning their keep. We all have stories of the one we should never have sold - oh I miss my '65 Duosonic.
So I'm down to only 3 electric guitars. None of them expensive but all 3 have that magic 'something'. 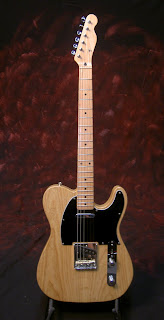 This is a 'bitsa' Tele.
The body is from Allparts and its a really light piece of Swamp Ash. Swamp Ash is lighter and airier sounding than other ash. With the large metal bridge and maple neck I needed to mellow out the tone of this guitar while keeping the essence of the Telecaster sound. Swamp Ash does this.
I've finished it with Danish Oil so as not to impede the resonance of the timber. This guitar just gets better with age - the more its played and the harder its played the better it gets (If only cars were like that).

The neck is from a mid 90's 'Made in Japan' Squire. They are really fat club like necks so it was ideal as a blank for me to re-shape. It's slab cut and pretty rigid and stable.
I've given it a very slight 'V' profile, keeping the depth but removing a lot of wood from the sides. I removed the headstock logo and re-finished the neck with matt nitrocellulose lacquer. One of these days I'll get around to re-fretting it - they are still the original frets.

All the hardware is USA made Allparts except the tuners which are still Squire. It has the Fender 4-way switch to get the extra humbucker sound although I never use it. I want my Tele to do Tele stuff and that just doesn't fit. I don't want versatility - if a guitar can do one or two things well then I'm happy. Its got the TBX tone control which I leave set to the middle. I have occasionally turned it to the more treble setting towards the end of a long gig when my treble hearing's going but try not to.

The pickups are Texas Specials which I was never 100% happy with so I've re-wound them. I scatter wound them to be a wee bit hotter than vintage spec and its opened the sound up a huge amount - so much more clarity.


I've kept the look as simple and traditional as possible - for me that's what Telecasters are about.

This is a ROCK monster! This Frankenstrat has one purpose and that's when I play in a rock covers band. Its a Chinese made Axe Tech (?) and cost $90NZ second hand. It weight almost nothing and fits like a glove - important when doing 4 hour gigs. 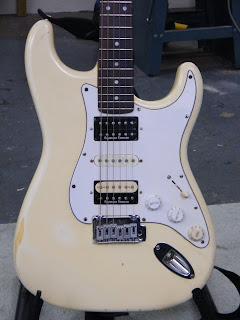 The fretboard has been re-radiused to 20" (very flat) and fretted with narrow jumbo fretwire. After an accident at a gig I re-finished the neck with shellac which feels great. The action is low with D'Addario 10-52 in E flat. This is a fast guitar built for stage use.
I've removed a fair bit of the finish on the body to open the sound up.

The trem is blocked off and the posts re-mounted in hardwood inserts which brought a lot more life to the sound.

The pickups are Seymour Duncan JB and Jazz. They have a fantastic generic rock sound which works really well for covers. There's not a lot of character in them but they can sound close enough to most things. The middle pickup's a dummy.
The 5-way switch gives me JB humbucking, JB in parallel, JB and Jazz in parllel, Jazz in parallel, Jazz humbucking. Works for me.

The third one is my archtop. 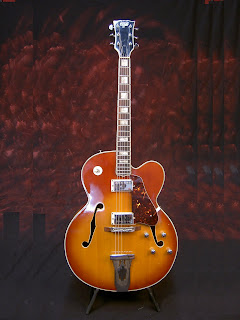 It's a copy of a Gibson L5 made by Hondo in the early 70's. Its one of the ones that actually came out of the Ibanez factory. It's huge and uncomfortable but I love it. There's such a huge fat sound in there.

For amplification I'm using a vintage Carlsbro TC60R. I believe this model was discontinued in 1973. Its an all valve 1x12 combo with ECC83's and EL34's. Is got 2 channels and reverb.


There's no master volume so it just does loud and clean. I get overdrive from a boss pedal. Using both channels that gives me 4 basic sounds - loud and louder, clean and dirty.
For rock gigs I take the amplifier out of the combo and slot it into a head I made for it and run a Laney 4x12. That gives so much more punch and direction to the sound - completely different. 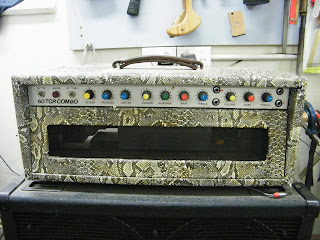 So that's my set up - simple really. I do try not to buy guitars but who knows what temptation is around the corner.