This one is a 'real' repair, in the sense that something is broken. Its a Fender Bronco which is an instrument I very rarely see. 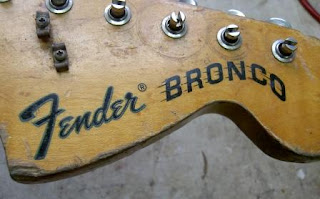 It is by no means a new guitar but it still gets regularly gigged and toured with NZ punk band Die!Die!Die!

For more info on the Fender Bronco take a look at:

It spent a brief few days at my workshop between a UK and an Australian tour. The main priority was sorting out the electrics, a missing fret (!), and some set up problems. I also took the opportunity to repair a missing chunk of fretboard. 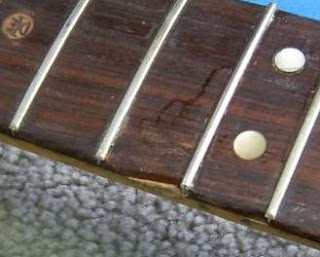 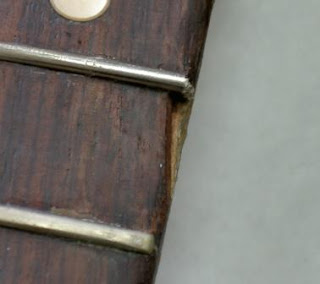 It looks to me like the neck has has an accident with a mic stand. The maple of the neck has been dented and a chunk of rosewood snapped off along with a fret. I've put a new fret in and need to replace the piece of fretboard before I can file the fret end to match the existing frets. 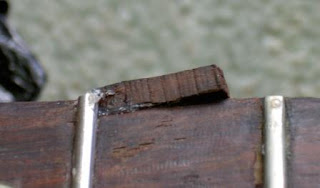 I find a piece of rosewood that is a good colour and grain match and glue it into position. 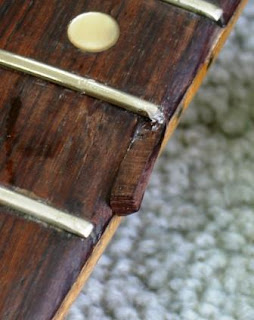 I've cut it to marry up to the old fretboard but at this stage I'm not concerned about the shape of it. 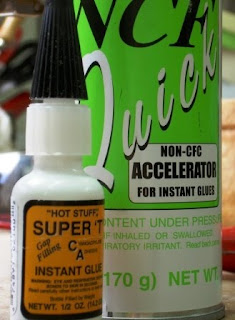 I use Hot stuff super glue for this. It comes in a few viscosity and I've used the thicker one so it doesn't soak into the grain too much. To speed the job up I use accelerator spray which makes the glue dry almost instantly. There's no need for clamping.
So now there's a lump of wood sticking out of the side of the fretboard I need to shave off what I don't want. 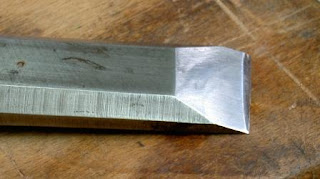 I use my old 5/8 chisel for this. I like sharp tools a lot. I sharpen most of my chisels to a much shallower cutting angle than most woodworkers. This gives me a sharper blade but it doesn't hold its edge for long. So I have to sharpen it more often. I only ever use them for shaving - never with a mallet. If I was cutting out door hinges it would be a different matter but this is luthierie.
I use wet stones and a strop and get my chisels sharp enough to shave my arm hairs without a rash. You can spot a luthier by the bald patches around their left fore arm :-) 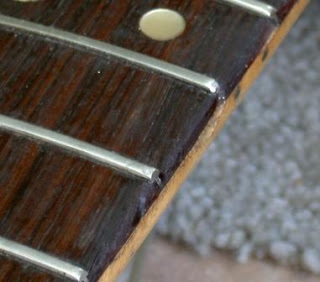 Here's the new piece after the chiseling and I've started shaping the fret end to match the old ones. 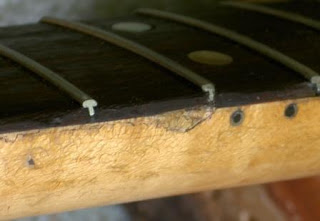 The dented maple on the side of the neck I filled with super glue and smoothed off. You can see it but not feel it. To make it invisible would simply take too long - this guitar is going to be gigging in Oz in a couple of days.

So the Bronco lives to gig another day. I do love seeing vintage guitars still out there doing it. It seems so sad to me when they get retired because they become too precious. This is Rock n roll after all.
Glyn