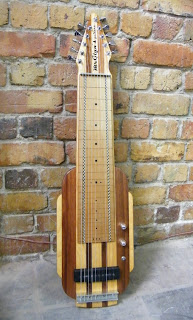 Towards the end of last year I got a call asking if I could make a 10 string lap steel guitar. Why not I thought.

In their simplest form lap steels are very simple.

I wanted to be a tad more sophisticated with mine. This might be a simple instrument but the components and construction still make a difference to the sound. It's a fretless electric guitar with a high action - the wood, bridge, nut and electronics are just as important as for a LesPaul or Stratocaster. Well that's how I look at it anyway.
I decided to design it with a cool old traditional vibe - Empire State meets LeMans which sounds like I'm mixing my decades but there's a boldness of line in common that I like. 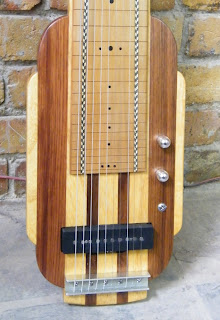 I combined 2 woods, Paulownia and Australian Blackwood.
I wanted a hard wood (Blackwood) to both emphasize the high frequencies and help transmit vibrations along the instrument and help it sustain. It gives it structural strength too.
The soft Paulownia is great for lower frequencies, warms up the bass and mids and adds an almost reverb like quality to the note.
Blackwood on its own would make a harsh sounding heavy instrument with too much treble, Paulownia on its own, wooly and undefined without enough structural strength. But together, they really work.
They give a nice colour contrast too with the darker stripes running right through the instrument.
For the fingerboard I chose a piece of Swamp Kauri (https://en.wikipedia.org/wiki/Swamp_kauri). This is one of the oldest workable timbers in the world. I don't know how old this piece is, I'd need to get it carbon dated, lets just say a few thousand years. It's frequencies lie between the other two woods and it's a beautiful colour. It gives the player something pretty to look at. We're lucky here in NZ to have some fantastic timbers. I inlayed fret markers and some chequered stripes into it. 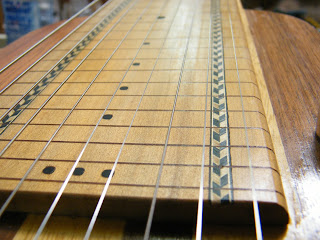 I chose aluminium for bridge and nut, it has a lively, quick response. Steel feels like it reacts slower. I think that extra mass just takes more string energy to get it moving. I used long screws to mount the bridge deep into the wood - that coupling is important.
I made the P90 style pickup from scratch using alnicoII magnets and fibre board. I wound it as I would a conventional P90, ties the ends off and then wound a couple of thousand extra turns of thin wire on top.
Using a switch the extra turns can be added. So it can go from a traditional chiming pure sound to a grunty, dirty powerful blues tone at the flick of a switch - two pickups in one.
I got the pickup cover 3D printed, remember this is a 10 string, parts just aren't available. 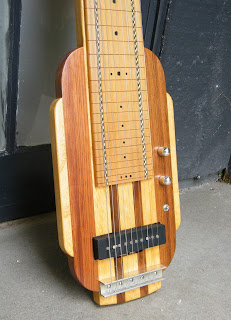 I had the decals made up in a groovy font - I usually inlay my guitars but the decal suited this one better. 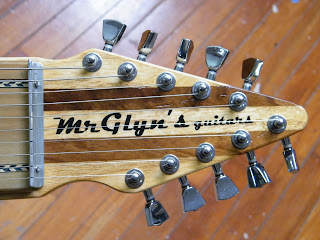 I finished it in shellac so as not to stifle any of the sound I'd worked hard to achieve.There's no point in making a light, resonant instrument and then stifling it with thick polyurethane just for the sake of ease.

By now I'd gone way over the usual spec for a lap steel (I just can't help myself) but I do think it's an instrument that needs to be taken more seriously.
I'd come in exactly on budget but a week over time.

He seemed pretty happy with the end result. 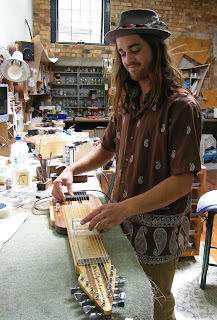