You may have noticed that when you turn the volume control down on an electric guitar it not only gets quieter but also more muddy. As the volume goes down so does the clarity. This can, of course, be useful. Quite often you'll want to be able to take some sparkle off the sound of single coil pickups. But with humbuckers I think they just get too wooly and undefined as the volume goes down.
So here's the solution, it's cheap and simple, easy to fit and makes humbuckers so much more versatile without taking anything away from the full volume sound. I'm talking about treble bleed capacitors.
For our purposes all you need to know about capacitors (caps for short) is they allow treble frequencies to pass through them but block bass. The frequencies involved depend on the value of the cap.
The volume control (potentiometer or pot) on an electric guitar looks like this: 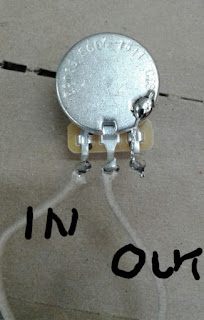 It's a fairly simple device, As you turn the volume down the resistance between the 'in' and 'out' leg increases. This makes it increasingly harder for the signal from your pickups to get through. Less signal means quieter.
Here's the same thing with our cunning treble bleed: 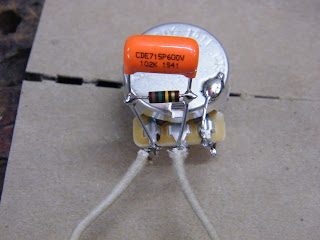 This one has the 'Orange Drop' treble bleed which has a resistor added to it. This resistor softens the treble as you turn down making the effect more subtle. My preference is for the cap on its own.
So as you turn down and the the resistance increases there's an alternative path for the signal  - through the cap. But the cap will only let treble through. As you turn the volume down you're also turning the bass down. As a result you have a usable single coil (ish) sound when the volume is low. If you're overdriving an amp the result is cleaning your sound up. So with a high gain amp and your volume at about 1/4 you get a bluesy breaking up sound , crank the volume on the guitar and you're rocking.
Here's a picture of me rocking. 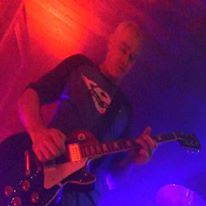 As you can see, it's very effective.
On my guitars I prefer a simple treble bleed (0.001uf), no coil taps or series parallel. Just the volume control.